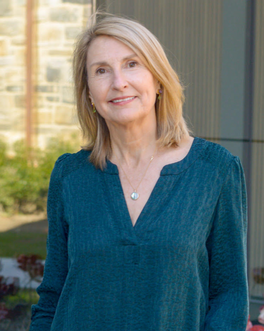 Upon first meeting Michelle Lichtenberg, you are disarmed by her bright smile and her singular style, as she is equally comfortable in funky slippers, a French beret or opera length gloves. You quickly get the sense that she is genuinely delighted to see you and cares what you have to say. The warmth, boundless energy and unwavering belief in community Michelle has brought to every task over the last three decades has engendered an expansive spirit of collaboration, inclusion and camaraderie to volunteerism in Scarsdale, inspiring countless others to follow her example, working for the betterment of our Village.

Born in Minneapolis, Minnesota, the oldest of four children of a stay-at-home mother and a child psychiatrist father, Michelle was raised in Bethesda, Maryland. Kindness, compassion and empathy were Michelle’s watch words from an early age growing up with a brother who was mentally handicapped.

After she received a B.A. in English and Art from Skidmore College, Michelle returned to the D.C. area and worked in advertising for the Circle Theaters Corp. She met her husband, Frank, while he was a Fellow at the Brookings Institute. They married in 1981 and embarked upon a series of moves that might be seen as a forerunner of Michelle’s love of traveling, from Watertown, Massachusetts, where Michelle earned her M.B.A. from Northeastern University while working at the university, to New York City, with a six-month detour to Australia, where Michelle was Associate Director of Executive Education at Columbia Business School.

Michelle and Frank moved with their two young sons to Scarsdale in 1991. It was not long before she was approached by the Greenacres PTA President to get involved. As a working mom, Michelle was drawn to the district-wide PT Council Budget Study Committee because she was able to attend the evening meetings. Once she transitioned away from working full-time, Michelle became active in the PTAs at Greenacres, the Middle School, and the High School and at PT Council. Michelle beams when she recalls the “Red Carpet Walk” that she spearheaded in 2003 when she was President of the High School PTA. The event precedes the senior prom every year, developed to curtail drinking at pre-prom parties and during limousine rides to the prom following national coverage of underage drinking at the High School’s fall Homecoming Dance. Awarded the Bibbidi-Bobbidi-Boo Award by the Scarsdale Inquirer, the Red Carpet Walk has become a popular community event enjoyed by all.

Michelle has also been actively involved with the Scarsdale Public Library for the last ten years, serving as a Trustee from 2011 to 2016 and as President from 2013 to 2015. During her presidency, she oversaw the finalization of the Library’s first Strategic Plan, the development of the Master Plan, the retention of the architectural firm responsible for the extensive renovation and expansion, and the formation of the Capital Campaign Committee, which she later joined. She is especially thankful to have had the opportunity to participate in the Library’s transformation from inception to completion.

Michelle’s volunteer service truly sets an example of civic responsibility toward the betterment of our community. While she is grateful to the community for affording her so many rich opportunities and experiences throughout her volunteer life in Scarsdale and for the wonderful people she has worked with and their friendship, we are fortunate for the many contributions Michelle has made and continues to make, with grace, humility, and generosity, in service for the common good.

Notwithstanding a growing list of responsibilities that she has taken on, Michelle manages to find the time to bear witness to her new granddaughter’s magical achievements, revel in moments spent with her grown sons, enjoy long cycling trips with Frank, curl up with a good book, and plan her next trip post-COVID.