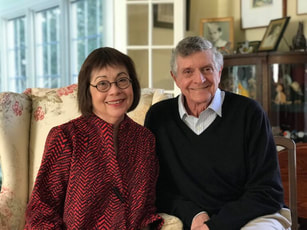 Kathleen (BK) Munguia and Jon Mark have been committed volunteers in Scarsdale for over 25 years. Their volunteerism has spanned Scarsdale’s schools, village, and community organizations.

BK grew up in Texas and graduated from Yale University. She taught high school in San Antonio before attending Columbia Law School. Her father was active in local politics, and from an early age, BK worked on political campaigns, going door-to-door to collect signatures and distribute literature. BK’s cousin was the second Hispanic mayor of San Antonio and a Clinton Administration cabinet member. Hence, civic engagement is in BK’s DNA.

Jon grew up in Scarsdale and graduated from Scarsdale High School. After attending Dartmouth College and Columbia Law School, he served as a law clerk and then joined Cahill Gordon & Reindel LLP. Jon’s family also provided a model for civic involvement. His mother was an active member of the Quaker Ridge PTA before becoming a teacher in the Scarsdale Schools. His father was a member of The Town Club (now The Scarsdale Forum).

BK met Jon’s brother in law school, and he arranged for her and Jon to sit at the “singles” table at his wedding. Jon and BK were married in 1986 and moved to Scarsdale in 1992 to raise their children, Ramona and Sandor.
BK was first to get involved in Scarsdale matters. She organized gardening projects at Heathcote School before branching out to serve on the School Board’s Legislative Committee, the School Board Nominating and Administrative Committees, and the Procedure and Scarsdale Citizens Non-Partisan Campaign Committees. She also served on the Board of the Scarsdale Forum for several years and then was vice president and president. A lifetime member of Girl Scouts USA, BK has spent several decades volunteering for Scarsdale Edgemont Girl Scouts as a troop leader, mentor, and liaison. For 17 years, she advocated for a safe social space for teens and served as a board member and then president of the former Scarsdale Teen Center. Currently, BK is vice president of The Scarsdale Foundation, a board member of Scarsdale Edgemont Family Counseling Service, and second vice president of the Scarsdale Democratic Town Committee. She is a quiet workforce, devoting her time on behalf of others within Scarsdale’s borders and beyond.

Jon spent the first part of his volunteer life identified as BK’s husband who helped wherever he was asked. He joined other dads coaching sports before expanding his commitments. Jon served as a two-term Village trustee before becoming Mayor in 2015. Jon chaired the Scarsdale Bowl Committee and became the vice president and president of the Scarsdale Forum – positions BK had filled previously. He also was vice chair and chair of the Citizens Nominating Committee and co-chaired the Scarsdale Non-Partisan Party Campaign Committee. He recently joined the board of trustees of Westchester Reform Temple and continues his engagement as a board member of the Scarsdale Forum, serving as a mentor to the next generation of Scarsdalians.
​
Reflecting on their civic involvement, BK and Jon firmly believe that their commitment and the commitment of so many contribute greatly to making Scarsdale a vibrant community. They urge all Scarsdale residents to get involved because it is a wonderful way to form lasting friendships and give back to a community that enriches us all.